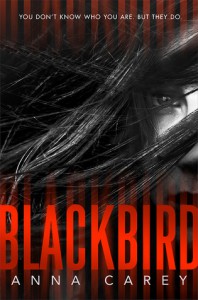 I wasn’t sure what to expect when it came to reading Blackbird by author Alley Carrey. I’ve never read anything from the author’s previous works, but I’ve heard mostly good things. The cover was pretty which was enough to suck me in and the brief description I found for the novel gave it a very mysterious feel. I dove head-first into this read and was surprised by it.

Blackbird is told in the second person when a teenage girl wakes up on a subway’s tracks with no recollections of how she got there. From that point onward all of her actions are centred around her own survival. There are people chasing after her and she’s positive that they only want to see her dead. With no knowledge of who she is or where she’s from, all she knows about herself is that there’s a tattoo on her wrist that might just explain everything. While trying to uncover who she used to be, she crosses paths with Ben—a drug dealing teenager who does his best to take our protagonist (adopting the name Sunny) to sanctuary. But it’s only a matter of time before the people hunting her catch up to them…

All in all, Blackbird wasn’t at all what I’ve expected. On Goodreads the novel is supposed to be The Maze Runner meets Codename Verity. I haven’t read either of those books but I have heard good things about both of them. Considering how decent Blackbird was I do believe that it could deserve those comparisons.

What makes Blackbird stand out is the fact that it’s written in the second person (which I mentioned briefly up above). For those of you who don’t know what second person point-of-view is it’s a story told using the pronouns you/your/yourswhile addressing you, the reader. It’s something that I have rarely ever read (apart from Choose-your-own-adventure books when I was a kid) which also made me a bit nervous about reading. Second person is something that is, in my opinion, very hard to pull off but Blackbird does a good job of it.

The plot in Blackbird is one that kept me on the edge of my seat. I really loved the way that Carrey manages to weave in plot twists and leave unexpected surprises. The main storyline is essentially all about you/Sunny being hunted down for reasons unknown that most likely involve the blackbird tattoo on her/your wrist. There’s a side-plot in Blackbird that focuses mostly on the romance between you/Sunny and Ben.

I personally found it very difficult to get fully into the story with the second person narrative. It was refreshing and new at first but quickly made the ‘ride’ a bit bumpy. I felt very distant from the plot and from ‘myself/Sunny’ because of it. It was hard to get into the romance scenes especially when it’s nothing but youpronouns during those sexy, kissy-kissy bits.