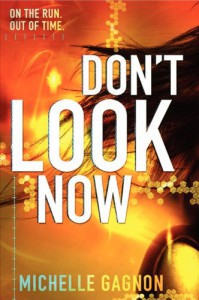 When I first read Don’t Turn Around by author Michelle Gagnon I was pulled into an epic world filled with action, teen-hackers and an evil mega corporation that has reached the absolute lowest of the low. By the time the novel had reached its conclusion I was more than excited to get started on Don’t Look Now which was (and I am proud to say) a thousand times better than I expected it to be. It was everything that was in Don’t Turn Around with the stakes raised and twists that you never see coming. I’m very impressed with the second novel in the Persephone (obviously it’s spelled with numbers and caps-lock but I’m honestly just too lazy to type it out repeatedly, so I hope you can settle on this) trilogy and can’t wait to see how it reaches its conclusion.

Taking place after the events that occurred in Don’t Turn Around, main character Noa has finally managed to outsmart and escape the wicked corporation D&R. In an effort to recruit other teens and keep them safe from D&R’s experimentation, Noa invests an immense amount of effort and time to make allies, all the while partaking in the hacktivist group ALLIANCE. Meanwhile, Peter is still trying to keep up with Noa’s from behind the screen of his computer as a hacker. The time he spent with Noa has taken its toll out on him and he’s still trying to work out his more personal relationship with his ex-girlfriend Amanda while balancing his life out. Then things go from bad to worse as new members join Noa’s fight against D&R. The unthinkable occurs suddenly, unexpectedly, and Noa and Peter are left unsure who their enemies and allies are or if anybody truly can be trusted.

The first thing I really wanted to talk about when it came to Don’t Look Now was the new characters that are introduced into the novel. Usually when there’s a sequel to a kick ass novel that originally only had a few sole characters its hard to get invested or interested in the new characters getting added to the plot. Half the time I personally feel like I’m just being bombarded which in turn makes it hard to care about what I’m reading. Not the case in Don’t Look Now. Every character was, to me, important in their own way and all of them were written perfectly and able to compliment any others they came to interact with.

With this also came new romance and with romance came more heartache and more feels than I could handle. Needless to say, Don’t Look Now left me with a few ships (if you don’t know what that word means look it up) that I could not part without. Noa is introduced to a new character who she may or may not get romantically involved with, the same goes for a newcomer character who also plays a major role in the novel. I was loving all this romance despite any pain it may have caused me internally when my heart felt like it was being stomped all over.

Apart from all the awesome characters in the novel there’s also a new amount of action and page-turning scenes that I hadn’t really been expecting. Gagnon just adds so many new ideas to the plot, so many new focuses and unexpected twists that I was just—not able to deal with it. I hadn’t been expecting it and finished the novel a lot faster than I had originally intended to. Personally, I found that this only made the experience all the better and I meancome on who doesn’t love a novel that is filled with action?

After everything that took place in Don’t Look Now I know that there are only good things that could possibly come from the last novel in the trilogy and I cannot wait to get my hands on it. I would recommend these novels to fans of sci-fi, readers who want a fast-pace, intense read and to any readers who want a badass female protagonist. You won’t be disappointed.