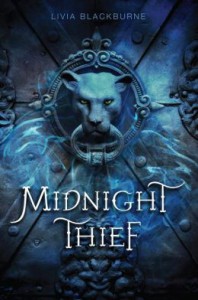 When I saw what Midnight Thief by author Livia Blackburne was about, I was interested and ready to get reading. The premise sounded cool. The characters sounded unique and I’ve been dying to get some historical/fantasy in my life again. I went into the novel ready for anything and have to admit that it wasn’t quite what I expected which isn’t necessarily a bad thing. There are plot twists, amazing characters and a big bad that might not be bad at all.

Midnight Thief has two main characters. The first being Kyra, an orphaned teenage girl and thief who may be the best at what she does especially when it’s for the family she’s made for herself. When James, a charming assassin from the Assassins Guild comes to her and asks for her assistance, Kyra is pulled into a world where murder is commonplace and one where you act first and ask questions later. But Kyra isn’t certain of where her loyalties lie especially when being in the Assassins Guild forces her to do something she never imagined herself doing.

Then there’s Tristam, a palace knight who has faced the threat that is the terrible Demon Riders and lost a friend because of them. When he investigates the Demon Riders and the Assassins Guild his path crosses with Kyra’s and their fates become intertwined despite their being enemies. Then Kyra learns a secret about her past that will undoubtedly change her forever and makes her begin to question everything she knows.

Midnight Thief is a novel that was very fast-paced and unique when I began reading it. Yes, there have been thieving female protagonists in the past but never have I had one like Kyra. Kyra isn’t full of herself or a Mary Sue or anything. She’s real. She has a personality, she has a moral code and she experiences regret for her actions that will later shape her character in the future. Then there’s Tristam. Not as powerful a character as Kyra but still an important influence on the rest of the novel. He is both the enemy and an ally to Kyra but isn’t a ruthless knight. He’s also a very sensitive and emotional character. I liked that Midnight Thief’s characters weren’t wooden, senseless badasses.

The Assassins Guild and James also make for an unexpected twist in the novel. They begin as a force that looks like it will help make all the difference for Kyra’s life but prove to be darker than we thought. And it’s all because of James. James, the badass Assassin. James who is attractive and charming and initially has all this unresolved tension with Kyra. All I can say in terms of the Assassins Guild is that you never know who can and cannot be trusted.

What really makes Midnight Thief stand out is the Demon Riders. A strange people who wear the hides of animals and ride on large, crazed (what team?) wildcats (get your head in the game). They aren’t your typical antagonists. The Demon Riders murder and attack and nearly kill both Tristam and Kyra on multiple occasions but they aren’t bloodthirsty characters. The Demon Riders are still people who are trying to fend for themselves. They’re an interesting addition to the novel. Blackburne’s writing flows easily and is detailed when it needs to be. I found that it focused more on the characters and their internal struggle more than it did the setting. It’s very simplistic (and I mean that in a good way). All in all, I hope to see more from Miss Blackburne in the future.