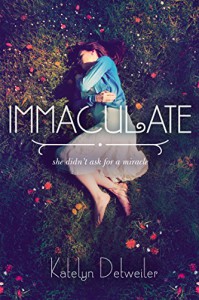 As someone who is in their teens, the premise for author Katelyn Detweiler’s Immaculatesounded incredibly intriguing. A teenage virgin becoming pregnant in modern days? It sounded like a refreshing and new concept to be explored and I definitely wanted to see just what kind of story Detweiler would weave. What I can tell you is that Immaculate is the kind of novel that is beautifully written and feels real from the protagonist to the reactions of the cast of characters in the novel. Immaculatewas the kind of read that kept me on the edge of my seat from the first page to the very last.

When seventeen year old Mina encounters a strange old woman at her workplace, she says just about anything and everything to get the woman to leave her alone. This includes agreeing to some unknown mission that is reserved for Mina and Mina alone. Mina is the kind of girl that everyone aspires to me. Intelligent, top of her class, with her future figured out and a life ahead of her. Two months later, Mina discovers that she is pregnant. The only problem is that she’s a virgin. Nobody believes her claims of virginity. Not her father or her boyfriend. As she loses some of the people closest to her, Mina finds a friend in her co-worker Jesse. As her pregnancy progresses, people from all over the planet hear of Mina’s miracle baby and she quickly discovers that her life will never be the same.

The thing that makes the plot of Immaculate work is its protagonist. Mina is a character who carries the story’s plot forward. My greatest concern before heading into this novel was that Mina would be the kind of Mary Sue character who is perfect in every way, shape and form. Completely and totally flawless. I was concerned that she would be whining throughout the novel about her pregnancy and how she didn’t want a miracle baby. You can imagine my relief to discover that Mina is an amazing protagonist who needs to be seen more in YA.

Mina is a character who is overall a strong female. She is prepared to stand up for herself and her family. She is resilient throughout her pregnancy. She faces the conflicts that come with her pregnancy with pride. Beyond that, Mina is a very well-written character. Throughout the novel’s progression readers can see the change in Mina’s mentality from a ‘child’ to a mother. Her protective maternal nature and long list of flaws are all part of what make her character work and in turn, help push the story’s plot forward.

The entirety of Mina’s pregnancy is handled well by Detweiler as it is handled in a realistic sense. The people around Mina—her peers, her family, her neighbors—are all hostile toward her which is exactly how people would react towards a pregnant teenage girl claiming to be a virgin. The characters reactions and actions towards Mina offer not only a sense of drama but also give way to intense action that pushes the storyline into an entirely different direction. This realism, alongside the fact that there are still people with the capacity to believe Mina as well, definitely helped me fall in love with Immaculate.

Then there’s Jesse. Jesse who is just adorable and kind and sweet. He’s everything that girls hope for in a guy. The way that he stands by Mina’s side and offers her friendship will warm the hearts of readers everywhere. Seriously, he’s kind of the ideal guy. He’s a character that most readers will swoon over indefinitely. I just hope that Mina’s story might continue and we’ll get to see more of him.