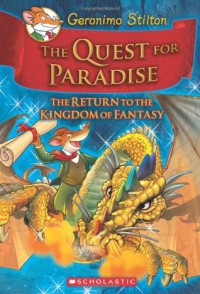 What is this story about?

Geronimo is helping the fairy in her castle.  They meet a new friend there named Snowy.  Snowy’s family was on a boat (like a ship), and her parents go in a bottom layer of the ship, but Snowy was the only who was not in the bottom bunk.  She was upset because no one would help her because of a really bad storm. Then the Dragon of the Rainbow comes to save her, and takes her to the castle in the Kingdom of the Fairies.  Then they went to the Kingdom of Witches to see the Witch Queen, who is pretty on the outside, but pure evil on the inside.  Then they went to the Land of Ogres, and then to the Land of Sweets.  Then they continued their adventure in the Land of Toys and the Kingdom of Fairytales.  Geronimo had to collect keys so he could open a tiny door in the castle.

So basically, the adventure is to help the queen from the Kingdom of Fairies to find the Heart of Happiness…and collect keys along the way.

What was your favorite part of the book?

My favorite part of the book was when Geronimo was looking at all the crystal hearts, and figuring out which one he was going to choose.

What was your least favorite part of the book?

None!  I liked every single part of the book.  (She gave me a “what are you talking about” face when I asked her this one)

Who was your favorite character?

My favorite character in this book was Geronimo, of course, because he was the silly one.  He was scared of a bunch of things, but that’s what makes him fun and interesting!

Who do you think should read this book?

I think everyone should read this book because it’s a really good book!  If you like adventure, you would really like this one!

How many stars do you give this book (out of 5)?