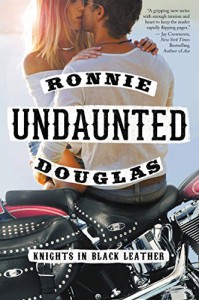 A book that made me think SOA (Son’s of Anarchy)?  Sold!  I had to jump on the opportunity to read Undaunted by Ronnie Douglas (aka Melissa Marr) because I love me a bad boy read.

But what I thought was going to be a book about a badass biker turned out to be not so badass.  I mean sure, Zion *swoon* (aka Killer) is one tough dude but not as tough as I would have liked him to be.  He was pretty tame, but dannnng he was sexy.  We did see little clips of just how tough this bad boy was, and don’t get me wrong, I enjoy seeing the softer side of these guys, I was hoping for more action!

There was mild teasing of action, and yes there is the big “fight scene” at the end, but it wasn’t explosive and didn’t’ carry me away.  The whole Wolf pack seemed more like puppies to me.

Aubrey…well, she was quite the character.  She was one girl who could NOT make up her mind.  There was so much back and forth with her when it came to Zion that my head was literally spinning.  It came to a point where I got so annoyed with her and the way she toyed with both Zion and Noah’s emotions that I wanted to quit reading.  Aside from Zion and gran, the other characters were just okay.  They didn’t leave a lasting impression on me.

The storyline had potential and there is a scene between Zion and Aubrey that prevented me from tearing my eyes away.  Some of the events that transpired were predictable, and interactions between characters seemed a little forced.  I had high hopes for this series, and am not yet ready to give up on it.  I’d be curious to see what the next book has in store.