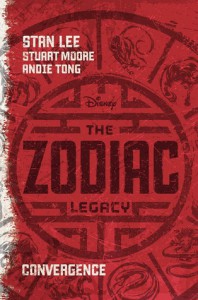 As somebody who is a big fan of comic books in general, I was eager to get reading The Zodiac Legacy: Convergence by Stan Lee. (And yes thatStan Lee). Usually, I’m a bit hesitant towards reading novels that are claimed to be middle grade but I couldn’t resist. The Chinese zodiac is always something that I’ve been inclined towards and finding out that the main character’s sign, a particularly important fact in the plot, is a tiger grasped my attention. I needed to know what would happen to my fellow tiger and delved into the innovative world of The Zodiac Legacy.

In The Zodiac Legacy, teen Steven Lee witnesses something beyond his wildest dreams. While on a school trip, he watches as a man named Maxwell unleashes the power of the Zodiac into the world. Maxwell wants nothing more than to absorb each zodiac’s superpower into his body. What Maxwell, the Dragon, doesn’t expect is for Steven to absorb the Tiger into his body. And what Maxwell can’t anticipate is the assistance he receives in thwarting his maniacal schemes in the form of a woman named Jasmine and her companion, Carlos. With the remaining powers of the Zodiac absorbed into numerous other people around the planet, it’s up to Steven, Jasmine, and Carlos to find them and teach them how to use their newfound powers. Lest Maxwell find them first and take them for himself.

What I love, love, loved about The Zodiac Legacy: Convergence was the illustrations. Every few pages there would be some wonderfully drawn pictures, detailing the scene. For a novel dealing with a bunch of characters who literally wake up with super powers, it was interesting to get a bit of a comic book-y vibe while reading. Not to mention that, considering the sometimes limited detailing in a scene, it was nice to get an exact visual of what was going on. These images definitely helped get messages across often in the novel.

The entire cast of characters in The Zodiac Legacy: Convergence are extremely diverse and well-written. No two characters are the same and I’m certain that readers will be able to find somebody who they can relate to while reading. Personally, I took a liking towards Jasmine and her backstory. Not to mention he is a total badass lady who could kick you into a wall and have you thank her for it. She’s calm (mostly), she’s cool, she is insanely awesome. Every scene that featured her were ones that I absolutely adored.  Also, the point of view (POV) of the novel constantly changes with the cast. We get to see the story through the eyes of the good guys and the bad guys. It leaves readers on the edge of their seats, excited to find out what happens next in the story.

While there were instances where I, an older teenage girl, found certain pieces of dialogue and certain scenes to be a bit campy, I think that younger readers will definitely enjoy reading The Zodiac Legacy: Convergence. It’s a new take on superheroes without the masks and capes and is written in a way that will have you eager for the next installment in the series.

I would recommend The Zodiac Legacy: Convergence to readers who are younger (10-13 age demographic) and interested in starting lengthier reads. Any readers who want an imaginative story that features a ton of action, or just want a novel that will keep them guessing, should also give the story a shot.