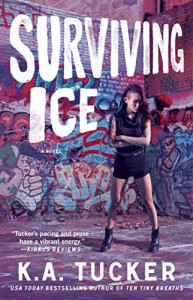 Just when I thought that K.A. Tucker’s Burying Water series couldn’t get any better, along came Surviving Ice. I made a silent (okay, not so silent) plea for Sebastian (the male lead) to make me swoon…and let me tell you…did.he.ever.

Surviving Ice by K.A. Tucker follows a super talented tattoo artist, Ivy, who was never one to settle in one place. Jumping around all over the world, Ivy was surprised to find that she was ready to settle down in San Francisco with the uncle who got her love for tattoo artistry started.

But Ivy finds herself sucked into a world of secrets and death when she unwillingly witnesses the murder of her uncle…and she doesn’t have any information on who the murderers were or why they went after her uncle. Ivy now finds herself wanting to escape the horrors that she witnessed, but is forced to deal with the aftermath. Little does Ivy know that all is not what it seems, and when she finds out the truth, her whole world will get turned upside down.

A call from his boss has Sebastian back in San Francisco and face to face with a firecracker Asian tattoo. Sebastian has a mission, retrieve a video tape that has information that could incriminate his place of work. All he has to do is find the tape and give it back to his boss. Sounds easy enough. Not so much. When his target has zero knowledge of this tape or information leading to the tape, his “target” slowly becomes someone that he wants to protect…no matter what the cost.

I love Ivy’s character. An independent Asian with a kickass attitude and doesn’t take crap from anyone. She is a character that I have been waiting for, and props to author K.A. Tucker for making her come alive in the pages of Surviving Ice. What I thoroughly enjoyed was watching the walls that Ivy has put up, slowly come down, all with the help of a sexy ex-Navy Seal named Sebastian.

I also loved the character of Sebastian. Sexy, hot, and protective, and allllllllllllll man. He exudes sex appeal and it totally oozed off the pages. The interactions between Sebastian and Ivy were addictive, and had moments of humor. I had a good laugh with Sebastian and his thoughts on papercuts.

I didn’t think that author K.A. Tucker would be able to pull off yet another amazing read, but she did folks! I absolutely love her writing. I love her characters (main and the secondary characters). I love the storylines and the twists in the plot that she expertly writes. I don’t think there’s anything that I DON’T love. And the men…ehrmagherd the men. They keep getting hotter and hotter!

If you’re looking for a book that will have you swooning and laughing, Surviving Ice by K.A. Tucker is the one for you. If you’re a fan of the Burrowing Water series, you definitely do NOT want to miss out on this one.