Thorn Jack (Night and Nothing #1) by Katherine Harbour 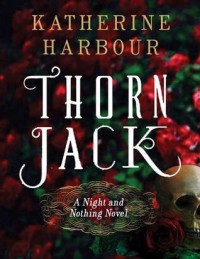 I’m not really a huge fan of reading books involving faeries.  I’ve read quite a few that just did not do it for me, and had quite honestly, turned me off of that genre.  But then, Thorn Jack (Night and Nothing #1) by Katherine Harbour was pitched to me, and I was intrigued!  And truth be told, I was not at all disappointed.  It was a read that I could not put down.

Finn Sullivan and her father leave their home that holds too many dark memories (her mother’s death and her sister’s suicide), and move to her father’s old hometown in New York.  Finn quickly becomes friends with Christie Hart and Sylvie Whitethorn, and are soon all inseparable.

At a party, Finn meets the mysteriously and irresistible Jack Fata.  And soon enough, Jack is all that occupies her mind.  But the encounter all has an effect on Jack, and Finn ends up being all that he can think about.  Eventually, Finn and her friends get “over their head” involved with the Fatas and their secrets, and soon everyone that is close to/involved with Finn Sullivan are in danger.

The way in which the intertwined the real world with the world with the Fatas was done superbly.  The characters were all had their own personalities, and I couldn’t help but fall for Jack.  You know me, I can’t resist a bad boy with a good heart.  It’s my weakness.  And I loved that I feared and loathed so many of the members in the Fata family, especially Reiko Fata and Caliban.

The author’s descriptions of the horrors that the Fatas can make their chosen victims see were terrifying!  Especially the Grindylow!  I was imagining them doing the jiggidy twitchy moving effect that you see in horror movies.  And Caliban’s character was like a nightmare come to life.  Charming yet lethal, whenever Caliban appeared I was intrigued and terrified at the same time.

Now Jack and Finn…if there were two people who should be together, to me, it was these two.  There was something in each of them that the other needed to feel whole.  Jack was irresistible.  The first time he showed up in the book, I was already hooked on him.  His mannerisms, the words he would say, his way of “flirting” had me smirking all over the place.  And the great thing about reading the copy of Thorn Jack by Katherine Harbour that we received for review was the short story at the end which was all about Jack.  Told in alternating times (past and present), it showed how Jack ended up the way he was, and shared a shocking truth about the Grindylow’s that had me gasping.

Thorn Jack by Katherine Harbour was a great Halloween read (seeing as how the big event happens on that day!).  With continuous twists and turns in the story, it was near impossible to stop reading.  Everything flowed well and the build up to the end was fantastic.  I will admit that there were certain times in the book that I felt were dragging and almost had me ceasing to continue.  But I’m so happy that I powered through because it was all worth it.

If you’re looking for a read that involves mythology and faeries, with a Romeo & Juliet feel, Thorn Jack by Katherine Harbour is the one for you.