Poet Anderson …Of Nightmares by Tom DeLonge and Suzanne Young 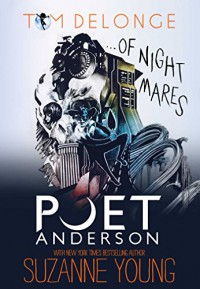 This book!  OMG this book!  I loved this book with such an intense passion, you have no idea!  Truth be told, I didn’t even have this book on my radar.  I had no idea that it was even a thing, and thank the book gods that it was a thing!  When they say that this is “a thrilling, edge of your seat story”, they were not joking.  I couldn’t stop reading…I couldn’t put it down!

Authors Tom DeLonge and Suzanne Young do an amazing job of mixing the dream world into reality.  I had anticipated that I would be confused with being able to rationalize which was the dream world and which was reality, but I was not confused at all.

You know how there are certain books that are split into 2 separate “worlds/realities” and you crave to read more about one world over the other? (Does that sentence even make sense?) In Poet Anderson…Of Nightmares by Tom DeLonge and Suzanne Young, I craved both.  I had no preference over one or other because of how both worlds converge into one.  How you ask?  I really can’t tell you!  You have to read it yourself, and bask in the presence of something great.

Basically, the story revolves around two brothers, Jonas and Alan Anderson, who have only each other after the death of their parents, and both of whom are Lucid Dreamers.  For years, Alan has been all that Jonas has, and has had to grow up pretty quick to become the “parent” figure.  Traveling from one town to the next, from job to job, school to school just to make ends meet, and ensure that Jonas gets his education.

While en route to the next job at a hotel that used to employ their parents, Jonas and Alan, get into a terrible accident, landing Alan in hospital and in a coma, and Jonas having to figure out where he’s supposed to live and eat.  After being told that there is absolutely no way that he can stay in his brother’s hospital room, Jonas takes it upon himself to step in to his brother’s footsteps and do the job that his older brother was hired to do.

Secrets and realities come to light, and Jonas must find a way to conquer his own internal nightmares and become the hero that the Dream World knows he can be.

The characters in Poet Anderson…Of Nightmares by Tom DeLonge and Suzanne Young jump right out at you.  They are unique unto themselves and there will be one that readers will relate to.  You can feel the emotions coming right off the pages and capturing your heart and soul.  The heartache and defeat that Jonas endures is one that will stick in your mind, days after reading the last page.

If you’re looking for a book that will quickly take you away to a new world and meet characters that will soon become unforgettable, I encourage you to pick up a copy of Poet Anderson…Of Nightmares by Tom DeLonge and Suzanne Young.  You will soon find yourself immersed in a world that will have you imaging frightening images of nightmares come to life.

One of the cool things with the hardcover that was provided to us for the tour was that it included a CD of songs by Angels & Airwaves which served as a soundtrack for the book.  It only intensified the reading experience, which was pretty freakin’ awesome!