The Witch’s Daughter by Paula Brackston 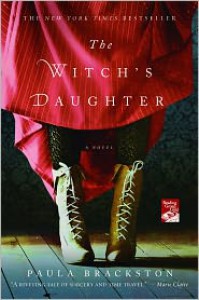 I was curious to get reading The Witch’s Daughter by author Paula Brackston. It sounded interesting and unlike anything I had ever read before and so I was very eager to dive right into the story. It was not what I expected and I mean that in the best of ways. It exceeded my expectations and was an all-around well written, good read.

In The Witch’s Daughter main character Elizabeth “Bess” Hawksmith has lived through some of the most horrible parts of history and now finds herself living in modern England. When a young girl named Tegan falls into her company, Elizabeth begins to teach the young girl the ways of the Hedge Witch.  With this, comes Tegan asking to know more about Elizabeth and about witches. And so, Elizabeth tells Tegan about the lives that she lived. First as Bess, the witch’s daughter who forced herself into the wicked warlock Gideon Masters’ company and was made a witch herself.

As time goes on however, and Gideon’s obsession with her grows stronger, Bess begins to play a game of cat and mouse with Gideon. Constantly running away from him, hoping that he won’t find her. Though it seems that in each new life that Bess starts, Gideon makes a reoccurrence in the form of another body. Growing worried for Tegan, Bess knows that Gideon is coming for her and the next time they meet will end with somebody dead.

What I found really interesting and unique about The Witch’s Daughter was how the story is written. It begins with a modern Elizabeth/Bess who has already experienced the events that are told later on in the novel. After she meets Tegan, Bess reveals the stories that are written in her Book of Shadows and that’s when things get really exciting. We learn about Bess’s life as she became a witch and Gideon Masters’ obsession with her began, we get to see her in the 1800s and see all of the aliases she used and lives she had for herself.

Parts of The Witch’s Daughter were dark but the way it was written makes certain scenes more numbed. I know that that sounds a bit confusing but the way that Brackston writes certain scenes that involve murder or death were always written so that they were dark and the point got across but they weren’t scenes that left me cringing. They were written artfully which I really enjoyed.

There is a lot that I do think readers should be aware of before they get reading. In The Witch’s Daughter there is a lot of sex and there is a rape scene. I do think that if that could trigger anything for a reader or be something they didn’t expect from the novel should be wary of.